Special Guest: Michelle Icard
This podcast episode focuses on talking to tweens about topics that range from sexuality and technology to the changing parent-child relationship. How do you approach tweens so that both people feel heard? Michelle Icard suggests the BRIEF method that stands for: Begin peacefully, Relate to your child, Interview to collect information, Echo what you’re hearing and give Feedback. This podcast provides tips and scripts for talking to kids about suicide. What are the risk factors? What are the protective factors? And what should we say if a child seems that they are hopeless, helpless or have said that they are thinking about ending their life. This is an uncomfortable topic- but one that we should and need to discuss. 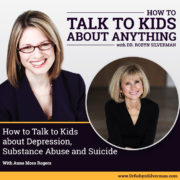 This podcast will focus on how to talk to kids about depression, substance abuse and suicide from the perspective of a mother whose child died by suicide in 2015. Suicide is the second leading cause of death among individuals between the ages of 10 and 24, only behind unintentional injury, in the United States. Much of suicide has a correlation with depression and substance abuse—and while there is an epidemic of teen depression and suicide, only 45% of teen girls and 33% of teen boys who has experienced an episode of depression got treatment in 2019. It’s time to get talking. In fact, it’s talking and listening that can be the very thing that can prevent suicides from happening. We discuss the implications with Anne Moss Rogers, the author of Diary of a Broken Mind on this episode of How to Talk to Kids about Anything. 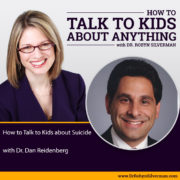 Special guest: Dr. Dan Reidenberg.
Nearly 800,000 people die by suicide in the world each year, which is roughly one death every 40 seconds. Suicide is the 2nd leading cause of death in the world for those aged 15-24 years. Suicide is the 3rd leading cause of death for 15 to 24-year-old Americans, according to the CDC. These are the statistics—but when it comes to suicide and talking to kids, the statistics don’t give us the words, the feelings, the loss, the answers. In fact, Everytime there is a suicide in our communities, in our schools, in our families, and in the lives of our children- it usually leaves us with more questions than answers. How do we talk to kids about this extremely difficult topic? 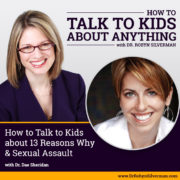