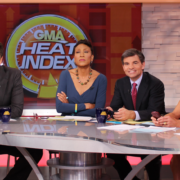 When a high school football team won a game 91-0, a parent from the losing team filed a complaint against the coach, claiming it was bullying. Was it? I sat down with the amazing folks at Good Morning America to discuss.

What is bullying? Most of us know that bullying is a conflict that consists of at least two or three participants:

Bullying used to be thought of as the physical acts of the biggest school yard boy who pummeled the weak kid on the playground, stuffed him into a locker, forced others to do his school work or stole their lunch money.

Now, bullying is defined as: Harassment, intimidation, or bullying is defined as any gesture, act (written, verbal, or physical), or electronic communication (i.e. through phone, computer, pager), that is perceived to be motivated by any actual or perceived characteristic (i.e. race, color, religion, gender, sexual orientation, disability, distinguishing characteristic), that disrupts or interferes with school (on or off school property) or compromises the rights of other students.

But would we know bullying when we see it? How do we know the difference between bullying and what is considered normal social conflict? Let’s put it plainly.

Here’s how I explain bullying on Good Morning America:

A: AGGRESSIVE: Is it aggressive? Bullying feels like an attack.

B: BALANCE of power: Is the balance of power unequal? Bullying involves uneven power such that age, popularity. size, ability, clout and special needs can play a role.

C: CONSISTENT: Is this happening often or only once? Bullying involves a pattern of consistent incidents.

D: DELIBERATE: Is there an intention to harm, hurt or provoke? Bullying is intentional not accidental.

While social conflict and intense (uneven) sports competition can feel brutal, this, in my opinion is not bullying. The other team was attacking the ball, the plays and the win– but not the other team. There was an imbalance of skill and power, to be sure– but this was one game and nobody was deliberately trying to hurt or harm the other team’s feelings or moral. Nobody says this is easy– but we can’t call it bullying. Doing so plays down what bullying really is– and the kids who truly need the help.

I’m stuck. What’s left of me now…nothing stops.  I have nobody. I need someone. ? Amanda Todd, a once, promising happy young Canadian girl committed bullycide on Wednesday after relentless, senseless attacks– physical, emotional and psychological– over several years followed her from town to town.

Her horrible story is hauntingly told in a youtube video with cue cards and shaking hands. What began in seventh grade when, she wrote, “I would go with friends on webcam [to] meet and talk to new people.” A stranger made her feel attractive and convinced her to flash the camera.  A mistake that would unravel into years of stalking, black-mailing and bullying, this girl was shamed and made to feel worthless.

Even when moving to place to place to get away from the abuse, the tormenters would find her and continue to cyberbully and physically bully this young woman who was trying her best to find someone who would love her as she is.  She spiraled into depression, complicated by intense and crippling anxiety, self hatred, self harm, and private self-bullying (see the connection between bullying, mental health and suicidehere and how to report responsibly on suicide here).

At one point, 50 kids bullied her at one time.  A boy had lead Amanda on, told her he liked her, and slept with her only to gang up on her later with his then girlfriend and friends.  “Just punch her!” they yelled.  The kids filmed it. Her father found her in a ditch later that day.  Even then, she didn’t want to press charges and get anyone else into trouble.  Her self worth was obliterated.  She went home and drank bleach– which landed her in the hospital– and urged on her tormenters to make fun of her that much more– and even urge her to kill herself.

Sadly, that’s exactly what she did.  At the end of this video, uploaded just last month, she writes “I have nobody.  I need someone.”

I think this is the legacy she leaves– a message to all of us to be the someone these kids need.  Studies tell us that a majority of young people don’t feel that they have at least three people to turn to in a time of need or challenge (see more on this in the new Bully book I am proud to have been part of along with Rosalind Wiseman and Michele Borba).  As I tell my audiences when I present on bullying;

Please, be one of the three. Because you may actually be the only one. I know it’s hard. I know we’re all busy. I know we have no time. But cries for help don’t wait for a hole in our schedules.

It’s National Anti-bullying month and it’s way past time to make a change and commit to making this situation better for those who are suffering.

Peace be with you, Amanda Todd. I am so infuriated…So saddened by this tragic story and the many others that tell a tale of struggle and loss. How could this continue to go on like this? We must do better for you so it can get better for all. The original article hung on the kitchen cabinet of my childhood home for over 20 years– an important reminder to every member of our family of the power of gossip.

As bullying continues to make headlines, we know that gossip is a major component of bullying.  It ads fuel to the fire.  It is a vehicle to punish.  It excludes many while including a few– who is on either side can change on a dime.

My husband and I have often told the young people we mentor, if people will do it for you, they’ll do it to you.  In this case, if they are gossiping with you, they will likely gossip about you. While gossip can seem fun and frivolous to those who are doing it, it can feel quite painful to those who are discussed. Be careful of those who engage in this behavior as you might just be the one bitten next!

Has the gossip snake bitten anyone in your home or your school? If you could hang this anywhere to remind someone to watch what they say, where would you hang it?

Feel free to print it out and share. I can still practically recite it verbatim as I read it more often throughout my childhood than I’ll ever know. Not a bad thing. I think my Mom was onto something…

The SNAKE that Poisons Everyone is a post from: Dr. Robyn Silverman – Child Development Specialist, Body Image Expert, Success Coach & the Creator of the Powerful Words Character Development System