You are here: Home / Blog / organization 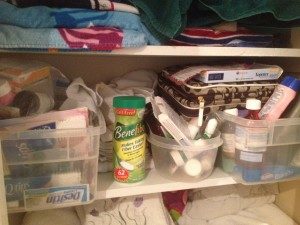 We had a pretty ridiculous practice in our house.  When one of our kids got sick (or we got sick ourselves…usually because they were sick), we went out to the drug store and got whatever we needed to help that person feel better. While on face value that might sounds completely normal and reasonable, the truth is that we already had all the stuff we needed.  We just didn’t know where to find it!

To say Spring Cleaning and getting organized was necessary is a real understatement.  What a mess!  As you can see, everything was dumped into containers and shoved in our linen closet and in random places around the house.  Cough medicine, band-aids, Pepto-bismol, extra bottles of pain reliever and the kids medicines were swimming together in a sea of anarchy. There was no rhyme or reason to the madness.

It was time to do something about it.  I figure, perhaps I’m not the only one who had this problem—and if I am, let this article serve as a reminder to myself of what was and how things should be!

(1) Gather it all together: Get everything that’s considered medicine or treatment for ailments in one place.  Go into every medicine cabinet and take out the pill bottles you haven’t even looked at in years.  Rescue the Band-aids from the bottom of the closet and the Neosporin from whomever’s room where you used it last. Now, dump it out on the floor or on the table so you can see everything.

(2) Check for dates: Go through every pill and medicine bottle and check for the expiration dates. You may be surprised.  Well, maybe not surprised but perhaps a little concerned or embarrassed.  Whoops!  Here’s one pill bottle I found from 2008—yup, I think that one’s a goner.  Um…dispose of those!

(3) Categorize: Put each medication or treatment into a category.  For example, “Stomach pain,” “First-aid,” “Cold & Flu,” “Ears, Eyes, & Throat,” and “Muscle soreness.”  You can have a miscellaneous if you don’t know where it fits.

(4) Box it up: Put the medications and treatments in clear drawers or clear boxes based on the categories you made. Place it in neatly so you

don’t have to rummage through everything to find what you are looking for…at midnight…with the lights off. Make extra little boxes to keep elsewhere if you often use certain things very often in a separate area of your home. For example, I made a “Boo Boo Box” because, well, I have 2 young kids who run into things a lot.  And I also made a box for all of my daughter’s hair ties and accessories—it was one of the most exciting parts of this process.  I don’t know how to explain how good it feels to have all that stuff in one place instead of all over my house.  Someone reading this will understand—others will likely think I’m nuts. 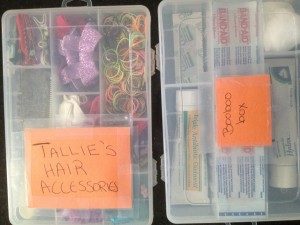 (5) Label it:  If you have a label machine, by all means, use it!  If you don’t, just write out what’s in the box on card stock, construction paper, or mailing labels.

(6) Place it in the closet and marvel: Wow.  Did you know you had that much space?  I know.  The question is looming; why didn’t you do this sooner?  That was knocking around in my brain too.  Forget that.  You did it!  How cool are you? 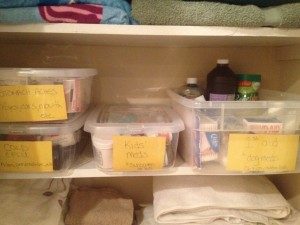 It was a little odd, but I was actually couldn’t wait until someone needed something. A little nerdy of me– but hey, I knew where it was! Stomach pain? Here you go! Lozenges? Back in a flash!  Of course, with a young family, I didn’t have to wait long.  And that boo boo box certainly has gotten a work out already.

Good luck to you!

Spring Cleaning! How to Clear Out the Medicine Cabinet So You Actually Know Where Things Are is a post from: Dr. Robyn Silverman – Child Development Specialist, Body Image Expert, Success Coach & the Creator of the Powerful Words Character Development System

I can’t believe I’m saying this…Parents are forgetting their kids at the children’s play place, Chuck E. Cheese’s.  While this may sounds like the makings of a Saturday Night Live skit to you, it’s actually the truth. Yesterday, Good Morning America called me to do a piece (which was squashed at the final hour) about a 5 year old girl who was left at Chuck E. Cheese’s last week.

It happened on Thursday night when the child was left at Chuck E. Cheese’s immediately following her own birthday party.  One of 10 children in a family, she was left behind by her mother—it wasn’t discovered that she was missing until the following day when her mother realized the girl wasn’t in her bed (she as getting her up for school).  Sounds completely implausible, right?

Perhaps.  But when 3 adults were attending the event with 19 children—things can get pretty hectic.  Was there a miscommunication of who was taking the child home?  Did everyone assume someone else was taking care of her?  We don’t know. The girl is now in protective custody until they determine what really happened here.

But, believe it or not, this has happened before to other parents.  In fact, it just happened last Monday to another family! Three-year-old Harmony was left behind by her parents at a Chuck E. Cheese’s restaurant in Bel Air, Maryland. They only realized that they had forgotten her when they saw a report about her on the evening news. Apparently there have been other cases of this in other areas as well.

Were the children misbehaving? Were the parents trying to employ the safe haven rule at Chuck E. Cheese’s? No. Parents haven’t left their kids there because they were at their wits end, they were leaving them there…by mistake.

I know.  It’s ridiculous. How can people forget their child…let alone in a place that they attended for their children? But if you had 10 children…if it was a big crowd…if you made assumptions about who was picking up or dropping off your child…if you were exhausted or fed up or had a headache…could it happen to you or someone you know?

Whether you think so or not, this does beg some tips about parenting in a large, chaotic play place.

(1) Ensure that you have enough adults: When you have 19 children at a range of ages (some very young) and only three adults, you are out sorely outnumbered. There needs to be enough adults to ensure the safety of the children—especially when they may all be heading in different directions.

(2) Have an exit strategy: When you are dealing with multiple children, make sure every child and every adults knows where to meet, who they are going with, and how to check in with the adults.

(3) Make sure everyone knows the rules: Before entering a large play place, talk to your children about the safety rules. Even though this place is devoted to having fun, safety must come first.  Young children must be attended to at all times—they must be able to see you and you must be able to see them.

(4) Do a headcount: When you first walk in, periodically throughout the play time, and upon leaving and getting into the car, do a head count.  Not sure if everyone is there?  Roll call!

(5) Pair up buddies: Another safety precaution is assigning buddies.  When each child has another person they must keep track of and who must keep track of them, it adds another layer of security.  When you call out “buddies!” everyone finds their buddy or, alternatively, can tell you that they don’t know where their buddy is at the time.  You can pair up friends—but

(7) Teach basic safety: Just like we discussed in the attempted Walmart kidnapping recently, each child should know how to protect him or herself. Who should s/he go to if s/he is lost?  What if s/he is approached by a stranger?  What if someone tries to take them away from the play area or outside through coercion or force?

(8) Teach life-saving personal information: Every child should learn basic facts about him or herself at a very early age.  For example, my daughter just turned 3 and already knows her full name and her street address.  If she needs it, she has it.  You can easily start to teach this to a young child by saying your address each time you approach your home—break it down a little at a time.  It can become a game of 20 questions—what number house do we live at? What street do we live on? What color is our home? What town do we live in?  Then teach him or her when to share the information and who s/he can share it with—and who s/he shouldn’t!

(9) If you can’t handle it, don’t do it: Think it sounds overwhelming to take a group of children to a large play area without more help?  Listen to your gut and don’t do it.  Even taking care of 2 young children in a large play area can be challenging if they go in two different directions—so know your limit and be sure you have enough back up.

(10) Recheck: At the end of the day, before leaving any venue with your family and friends, check and recheck that you have everyone!  Make no assumptions.

When Good Morning American did their preliminary interview with me, they asked if only bad parents would leave their child somewhere such as Chuck E Cheese’s. I can’t make assumptions about the character of any of the parents who have done this—but I can say that parenting begs incredible organization, preparation and attention.  In this case, these areas failed.

The Chuck E. Cheese’s situation pushes this to the limit considering that the parents didn’t know the child was missing until the next morning.  To that I say, check beds, kiss heads and make sure you KNOW where every one of your young, school-age, or pre-college age children are when you turn out the light at night.

What do YOU think? Has anything like this ever happened to you?