How to Talk to Kids about Suicide with Dr. Dan Reidenberg - drrobynsilverman.com

How to Talk to Kids about Suicide with Dr. Dan Reidenberg

You are here: Home1 / Blog2 / Podcast3 / How to Talk to Kids about Suicide with Dr. Dan Reidenberg

How to Talk to Kids about Suicide 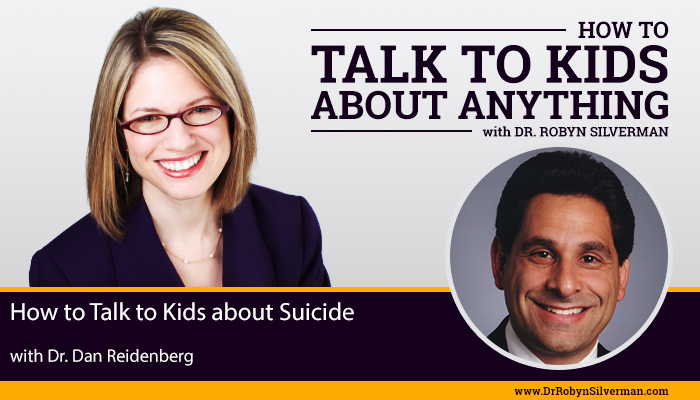 This podcast will focus on how to talk to kids about suicide– whether a parent or educator is having an informational conversation, a conversation because they believe someone is at risk or a conversation because they have lost someone to suicide. Dr. Robyn Silverman talks with SAVE.org’s Dr. Dan Reidenberg about suicide warning signs, the role of media and social media, why certain groups are more at-risk and what we can do now to help prevent or possibly stop a suicide from happening. As suicide rates are going up, this conversation is more important than ever. It might just save a life. Listen, then have the conversation today. Americans, according to the CDC. These are the statistics—but when it comes to suicide and talking to kids, the statistics don’t give us the words, the feelings, the loss, the answers. In fact, Everytime there is a suicide in our communities, in our schools, in our families, and in the lives of our children- it usually leaves us with more questions than answers. How do we talk to kids about this extremely difficult topic?

What gets me up every morning is the hope that we can save someone, says Dr. Dan Reidenberg of @SAVEvoicesofedu. This might be 1 of the most important conversations you'll have w/ someone. How do you #talktokids about suicide? Click To Tweet

The Good News about Bad Behavior with Katherine Reynolds Lewis

How to Use Duct Tape Parenting to Raise Respectful, Responsible & Resilient...
Scroll to top