How to Talk to Kids about Suicide, Sexual Assault & 13 Reasons Why with Dr. Dae Sheridan - drrobynsilverman.com

How to Talk to Kids about Suicide, Sexual Assault & 13 Reasons Why with Dr. Dae Sheridan

How to Talk to Kids about Suicide, Sexual Assault & 13 Reasons Why 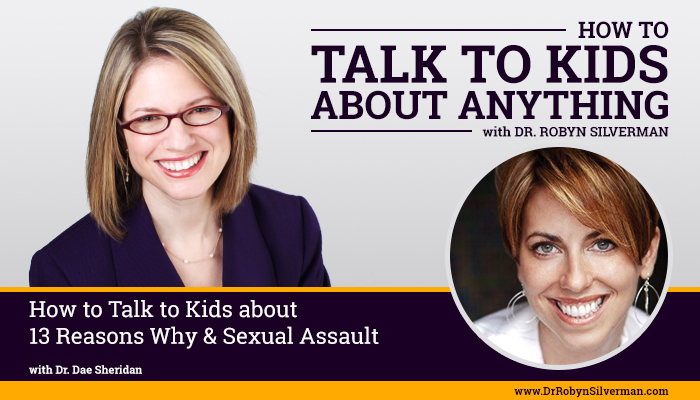 This podcast will focus on the Netflix show, 13 Reasons Why, as well as the “taboo” topics it covers, including suicide and sexual assault. How do we talk about these challenging topics with our kids? Should we allow our children to watch this show that highlights such sensitive topics and if we do, what should we keep in mind to ensure that our children feel supported and the subject matter is discussed in an age-appropriate and thorough manner?

The Netflix show, 13 Reasons Why, based on a book of the same name, has brought these topics to the forefront. The show, which is now available for binge-watching, appeals to teenagers and brings up some very complex, emotional and sometimes “close-to-home” issues from suicide, to cyber-bullying to sexual assault in adolescence.  Can the show provide some key teaching moments or should we be banning it in our home? Some critics say that this show glorifies suicide and should not be taken lightly as they fear an uptick in copy-cat suicide attempts after watching the show. And what about the topics the show brings up itself—should we be talking to kids about such taboo-seeming topics like suicide and sexual assault—you probably know my answer about that- and if we talk about these issues, how do we do it in a sensitive, age-appropriate way?

How to talk to kids about resourcefulness with Scott Sonenshein

How to Talk to Kids about being Mentally Strong with Amy Morin, LCSW
Scroll to top