How to Talk to Kids about Depression, Substance Abuse and Suicide with Anne Moss Rogers - drrobynsilverman.com

How to Talk to Kids about Depression, Substance Abuse and Suicide with Anne Moss Rogers

You are here: Home1 / Blog2 / Podcast3 / How to Talk to Kids about Depression, Substance Abuse and Suicide with...

How to Talk to Kids about Depression, Substance Abuse and Suicide 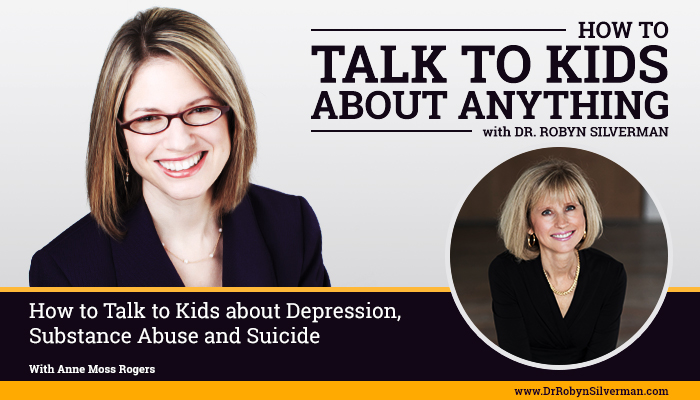 This podcast will focus on how to talk to kids about depression, substance abuse and suicide from the perspective of a mother whose child died by suicide in 2015. Suicide is the second leading cause of death among individuals between the ages of 10 and 24, only behind unintentional injury, in the United States. Much of suicide has a correlation with depression and substance abuse—and while there is an epidemic of teen depression and suicide, only 45% of teen girls and 33% of teen boys who has experienced an episode of depression got treatment in 2019. It’s time to get talking. In fact, it’s talking and listening that can be the very thing that can prevent suicides from happening. We discuss the implications with Anne Moss Rogers, author of Diary of a Broken Mind, on this episode of How to Talk to Kids about Anything. weight of stigma that we need to alleviate if we are going to help our kids who rely on us for open and honest discussion. According to the Addiction Center in the United States, suicide is the deliberate ending of one’s own life and is considered to be one of the greatest health epidemics by many on the medical field. Strange- since we don’t talk about it nearly as much as we discuss other health epidemics, do we? According to recent news out of the United Nations, Close to 800,000 people die by suicide every year, and for each death, there are more than 20 suicide attempts. Every year, suicide accounts for more deaths than war and homicide combined, and is the second leading cause of death among those aged 15-29, behind road injury. In the United States, suicide is the third leading cause of death for kids ages 10-14.

More sobering statistics- More than 90% of people who fall victim to suicide suffer from depression, have a substance abuse disorder, or both. There is a vicious cycle of depression and wanting to numb the pain that can then lead them to drugs and other risky behavior that can then, ironically, increase the severity or duration of the depressive episodes and impact judgment which can lead to suicide attempts—but also cause the supports around that person—family, school, friends, to crack and crumble in an effort to help that person or cope with the fallout from these behaviors. What are we to do? For help and answers, we turn to Anne Moss Rogers.

Anne Moss Rogers is an emotionally naked public storyteller, a brain tumor survivor and author of the book, Diary of a Broken Mind. She is the owner of the popular Emotionally Naked blog and co-owned and later sold her digital marketing business to pursue suicide prevention after her son Charles died by suicide on June 5, 2015. He suffered from depression and addiction. She has given a TEDx talk, Can a Blog Save Lives?, and has been interviewed by the New York Times. She has also spoken at the National Institute of Mental Health. Anne is a graduate of UNC Chapel Hill and lives in Richmond, VA with her husband. Her surviving son, Richard, works in LA as a filmmaker.

When we drag the subject of suicide out and we put it under the spotlight, things that felt insurmountable, become more manageable, says @AnneMossRogers on #talktokids podcast. Listen in to how to discuss suicide on the latest episode. Click To Tweet

How to Get Children to Behave from the Inside Out with Dr. Charles Fay

How to Talk to Kids about Climate Change and the Environment with Mary DeMo...
Scroll to top