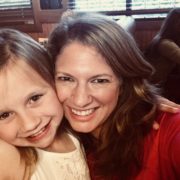 It was 1996, my Freshman year of college, when I came face-to-face with a truth that still follows me today- one unifying concern that almost all girls and women seem to share is that they want to change something about their bodies. I still remember when it happened, as it came as a surprise to me. One of my friends asked me if my thighs touched. This gifted young woman, with big brown eyes, a sharp brain and warm heart worried that how close her thighs were to the other cancelled out her talents, intelligence and overall value.

It stuck with me. I spoke to countless other women and teens along the way who felt similarly. Despite the strengths they had to offer, they felt that “looks” were more important than their other attributes.

In graduate school, I studies body image. In fact, I wrote a qualifying paper and my 167-page dissertation on the topic. As it turns out, even research tells us that despite all that women and girls have to offer this world, 96% of girls and women want to change something about their bodies.

I completed my book, Good Girls Don’t Get Fat: How Weight Obsession is Messing Up Our Girls & How We Can Help Them Thrive Despite It, based on my dissertation work, in 2009 with my newborn baby girl, Tallie, strapped to my chest. The book was published in 2010. It’s 2018– and the issue is just as prevalent today as it was then. But of course, my own mothering love and worry for my now 9-year-old daughter and her beautiful friends, sheds a much more personal light to this prevalent problem.

So, how can we help our girls thrive? END_OF_DOCUMENT_TOKEN_TO_BE_REPLACED 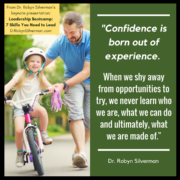 Someone asked me how to help her child become more confident– especially give that she felt she lacks confidence too.

You can’t will yourself to be confident. There’s no trick. There’s no magic button. In order to become confident you need to do the thing that scares you. You need to look in the face of uncertainty and still keep going.

You need to be louder than doubt. Bigger than the barrier. Bolder than the fear.

Yes you can. Just do the thing. When you do the thing that scares you, you realize, it’s not so tough. It’s not so bad. It’s not so scary. And along the way, you become better at the thing, don’t you? And becoming better at it often makes us feel more comfortable. Or at least you can say, “well, I’ve already done it once so I can do it again.”

So speak up. Stand up. Try the activity. Get up on stage. Have the conversation. Put yourself out there. Make the call. Plant your feet. Look them in the eye. Walk to the front of the room. Go for that run. Teeter, totter, slip, fall, fail and wipe out. Then get back up. Try again. Go for it. Your confidence depends on it. 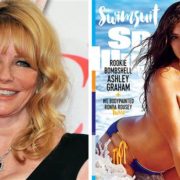