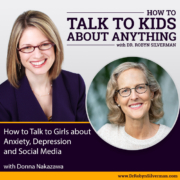 Donna Nakazawa: is the author of four books that explore the intersection of neuroscience, immunology, and emotion, including The Angel and the Assassin, named one of the best books of 2020 by Wired magazine, and Childhood Disrupted, which was a finalist for the Books for a Better Life Award. Her latest book is GIRLS ON THE BRINK: Helping Our Daughters Thrive in an Era of Increased Anxiety, Depression, and Social Media. Her work has appeared in Wired, Stat, The Boston Globe, The Washington Post, Health Affairs, Parenting, AARP Magazine, and Glamour, and has been featured on the cover of Parade and in Time; she has appeared on Today, NPR, NBC News, and ABC News. 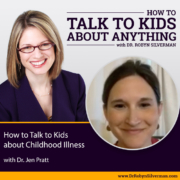 Dr. Jen Pratt: Childhood illness can turn a family’s life upside down. We probably all have friends, neighbors, community members or maybe even family members who have coped with or are currently coping with childhood illness. While it wasn’t my child, many of you know that my dear friend’s son, Gavin, was diagnosed in 2018 with Ewing’s Sarcoma and I was there for the initial meetings, tests, surgeries and flew in for some of the hospital visits or just to help out with my friend’s other child who often has to be sidelined when a sibling is ill. It’s hard on everyone. Perhaps you remember the interview I did with Gavin’s sister who talked with us about being a sibling and unfortunately, because Gavin’s cancer was so aggressive and rare—he lost his battle with it, and Jadyn so beautifully discussed how to talk to kids and how to cope with the children who have lost a sibling. Those were hard talks, weren’t they? But we really do need to learn how to talk to kids about all of this. Perhaps you just want to know how to be a good friend or family member while someone else you know is going through this—I applaud you for being here because boy, do people need that. Perhaps you are here because you need to get some questions answered for yourself and your own child who is coping with a childhood illness from dealing with hospital stays, delays, medication, missing out, fear of the unknown and the intense feelings of most everyone around you who cares about you. For all of this, let’s turn to Dr. Jenn Pratt. 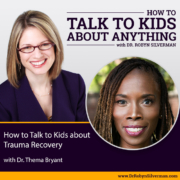 Dr. Thema Bryant: Children deal with stress, disappointment and trauma often—in the form of discrimination, bullying, abuse, neglect and other stressors—how do we help them deal with the trauma instead of burying it, dwarfing it and hiding who they truly are so that they can simply survive? How can they acknowledge their trauma, express their toughest emotions and in a sense, “come home” to who they are, to their bodies, to their identities to themselves when something has been profoundly lost? For this understanding of trauma recovery, we turn to an amazing and insightful guest, Dr. Thema Bryant. 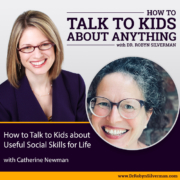 Catherine Newman: Middle School is a time of incredible growth—kids change a great deal while learning and practicing vital social skills that they will use throughout their lives—how to get along with others, talk about tough topics, compromise, still to your values, be an ally, show up as a good friend and so much more. How do we help open up these topics to kids so that they know what to say when they find themselves in sticky situations? For that, we turn to Catherine Newman.