How we can help kids lead and learn in a digital age Archives - drrobynsilverman.com

Tag Archive for: How we can help kids lead and learn in a digital age

You are here: Home1 / Blog2 / How we can help kids lead and learn in a digital age 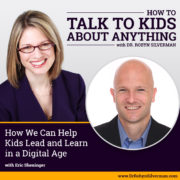 There’s no question that things have changed dramatically in the world of kids since we were young. After all, the phones we had were connected to the wall and had long coily cords that we stretched as far as they could go so we could get some privacy in a bathroom or a closet. The only webs we spoke of were spider webs, a tablet was something you took when you were sick and movies could only be seen in theaters or on HBO, as long as you were willing to get out of your seat and physically go change the channel.  I know, the horror.