How to Talk to Kids about Anything Archives - drrobynsilverman.com

Tag Archive for: How to Talk to Kids about Anything

You are here: Home1 / Blog2 / How to Talk to Kids about Anything 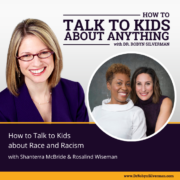 Talking about race and racism isn’t easy. There are a lot of questions that we may not know how to answer while in the moment and many situations that we may not know how to handle when we are in them. We also may be confused about how to raise children who are true allies and who are willing to step up, have tough conversations themselves and not just do what’s right in the moment but also what could be helpful in the long run as we strive for lifelong relationships and lifechanging opportunities for growth. How do we ensure we do better and embrace a willingness to engage in courageous discomfort as we dive into our questions about race and racism? For this, we have 2 amazing women on today, Shanterra McBride and Rosalind Wiseman. 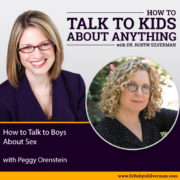 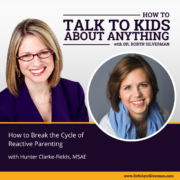 Hunter Clarke-Fields, MSAE, RYT, is a mindful mama mentor. Hunter is the creator of the Mindful Parenting course, host of the Mindful Mama podcast and widely-followed author of Raising Good Humans: A Mindful Guide to Breaking the Cycle of Reactive Parenting and Raising Kind, Confident Kids. She helps parents bring more calm and peace into their daily lives. Hunter has over twenty years of experience in meditation practices and has taught mindfulness to thousands worldwide. 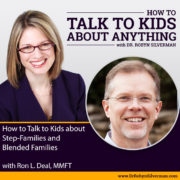 Ron L. Deal, MMFT – Every person in a family wants to feel loved and wants to be able to show love to others who they care about and appreciate. And while that concept may be simple- the execution can be surprisingly complicated as not everyone gives and receives love in the same way. Some may desire reassuring physical touch while another person enjoys compliments, encouragement and other words of affirmation. Still others may feel most loved when they receive gifts or their family members do acts of service for them—cooking, cleaning, picking up the dry cleaning, or fixing something that might help the other person. Some prefer quality time. Perhaps you recognize your love language in all of these—and the love languages of others in your family. Things get convoluted– and well-intentioned people miss the mark when they, for instance, value acts of service but their partner or children show love through quality time or words of affirmation. Not to mention, this can be hard enough in a family that hasn’t gone through the life altering changes like divorce, remarriage or death of a parent—but what about the blended family who has to navigate step parents, step siblings, step grandparents with all of their nuances, needs, rules, emotions, concerns and ways that all of these different people want to feel valued and important? Blended families must deal with the pain of the past, the complexities of new relationships and the unique challenges that come with creating one family. As parents and stepparents, how can we have these important conversations about fear, loss, inclusion, empathy and connection—tying the binds between the biological family members and the new family members? How do we find love, strengthen it and keep it in a step family? For these answers, I have the honor of having a wonderful conversation with our guest today, Ron L. Deal. 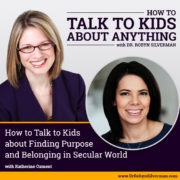 Special Guest: Katherine Ozment Katherine Ozment is the author of Grace Without God: The Search for Meaning, Purpose, and Belonging in a Secular Age. She is an award-winning journalist who has worked in publishing for more than twenty-five years, including as a senior editor at National Geographic, for which she once rode a donkey through the desert of Israel and Jordan for several weeks. Her essays and articles have been widely published in such venues as National Geographic, The New York Times, and Salon. Grace Without God was named a best book of the year by Publishers Weekly and Spirituality & Health. I’m not surprised because it is beautifully written and thought provoking. You can learn more about Katherine and her book in the show notes of this podcast as well as on her website  www.katherineozment.com 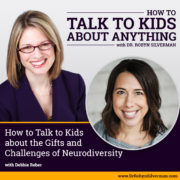 Imagine being stuck in a world that doesn’t really “get” who you are. You’re different and in many cases, people see these differences as bad and something that needs to be fixed. My next guest, Deborah Reber, has spoke to us before about neurodiversity- and is back to talk more specifically about what she refers to as “differently wired” kids. We are talking about the one in five children with ADHD, dyslexia, Asperger’s, giftedness, anxiety, sensory processing disorder, and other neurodifferences. One in five—20% of children are neurodiverse and they have many challenges they must face. And along with these kids, come the parents who love them but arean’t quite sure how to best help their kids but will try just about anything. They try to find the right school, teachers, therapists, medications, as well as the right parenting group and friends who will support them. It’s hard to know how to handle it all- but Debbie Reber is here to help. Special Guest: Destini Ann Davis isn’t a parenting expert, she’s a working mom and a certified parenting coach who has learned it all simply by doing and listening, and reading every book along the way. She advocates for peaceful parenting and positive discipline techniques that encourage both the parent and child to connect and communicate. Her positive energy and upbeat approach to parenting has resulted in her TikTok channel growing to over 900K followers in just a few short months- (last time I checked it was at a million and a half). Her approach to parenting isn’t clinical; it’s real life and focused on helping her followers become more peaceful and positive people so they can raise more peaceful and positive kids. 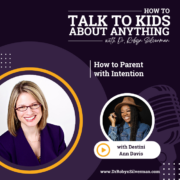 Special Guest: Catherine Pearlman Catherine Pearlman is the founder of The Family Coach and the author of Ignore It!: How Selectively Looking the Other Way Can Decrease Behavioral Problems and Increase Parenting Satisfaction. Catherine writes the nationally syndicated Dear Family Coach column and her work has appeared in US News, Parent.com, CNN.com,  Good Housekeeping and more. She’s a licensed clinical social worker, an assistant professor at Brandman University and a mom of two kids and a dog. She’s a New Yorker living in southern California. Most parents and educators who are listening to this podcast want to develop a culture in their homes or at school where kids are kind, accepted, allowed to ask questions and support one another whether so that everyone gets what they need to thrive. This necessitates some pretty uncomfortable conversations about bias, stereotypes, racism, ableism, gender and more. How can we help our children embrace antibias and antiracist practices that move beyond the antiquated views such as “I don’t see color” or “gender doesn’t matter” to a more advanced understanding of how these social constructs impact and define our peers and those we don’t know? How can we help our children realize what is equal and what is fair and how the difference effects ourselves and others? For all of this and more, we turn to Liz Kleinrock. 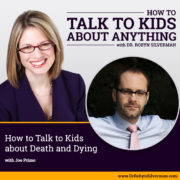 Having a conversation about death and dying is not typically a conversation people are excited to have with their kids. And yet, we all know it’s necessary. A friend of mine came over to me at a party the other day. She had just found out that her mother-in-law had stage 4 cancer. While dealing with her own whirlwind of emotions, knowing that I provide tips and scripts to have these tough conversations with kids, she asked me; “What do I tell the kids? What if they ask me if she’ll die? What do I say when she does?” The concept of dying can be scary, sad, confusing, angering and upsetting for many of us. Our own emotions, our concern about our children’s emotions- how they are going to take the news- how they are going to cope with life when someone they love dies- how might they grieve—what’s normal- these can make us worry about having the conversations in the first place. Not to mention, our confusion over what to say and how to say it can make this topic on how to talk to kids about death and dying- a real tough one.