You are here: Home

** We hate spam as much as you do!  We’ll never rent, sell or do anything yucky with your information!

Who is Dr. Robyn?

Dr. Robyn believes that young people are assets to be developed, not deficits to be managed. With that ideology in mind, she spends much of her time speaking, writing and podcasting about the best ways that parents, educators and mentors can help children and teens thrive. Battling bullying? Dealing with divorce? Need to have a conversation about responsibility, respect, focus or confidence? Dr. Robyn takes you from beginning to end so that you feel ready and your children feel understood.

With all the work that Dr. Robyn does, challenges are met with practical and accessible tips, scripts, stories and steps to make even the toughest conversations and parenting situations easier. As a mother and a Child & Teen Development Specialist, Dr. Robyn gets it. She is your one-stop-parenting-shop delivering exactly what you need, when you need it, from someone you trust.

Check Out The Latest Posts from Dr. Robyn’s Blog June 28, 2022
Meghan Leahy - Have you ever felt overwhelmed by the stress and perfectionism of our overparenting culture–and at the same time, yearned for solutions to ease the struggles of everyday family life? Perhaps you have been caught at the grocery store with a tantruming 2-year-old, made organic salmon for your 4-year-old only to have it thrown across the room or attempted to reason with your 5-year-old about why you should stay at the party so you could have some “adult-time” after they were more than an hour past done, done? We hear about the endless “shoulds” of modern parenting– and yet real life just needs real solutions. Today, we are going to discuss how we can parent outside of the lines with guest, Meghan Leahy. Meghan Leahy is the On Parenting columnist for The Washington Post, and a certified parenting coach. She is the author of PARENTING OUTSIDE THE LINES and is the mother of three daughters. She practices Zen Buddhism, holds a bachelor’s degree in English and secondary education and a master’s degree in school counseling. She has appeared on NPR, ABC and in numerous other publications. Leahy lives with her family outside Washington DC.
https://drrobynsilverman.com/wp-content/uploads/2020/08/RobynSilverman-PodcastArt-Leahy-700x700-1.jpg 700 700 Jason Silverman https://drrobynsil.wpengine.com/wp-content/uploads/2018/02/Dr-Robyn-Logo-GRADIENT-300x93.png Jason Silverman2022-06-28 13:22:302022-06-28 13:22:30How to Forego Impossible Parenting Standards & Tap into Our Own Wisdom with Meghan Leahy ReRelease 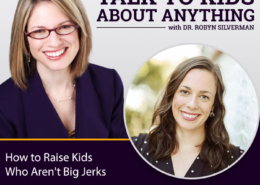 June 22, 2022
Special guest: Melinda Wenner Moyer This podcast will focus on how to raise kids who don’t act like jerks—who aren’t racist, sexist, rude bullies and instead show up in this world as empathetic, kind good people. Melinda Wenner Moyer, who writes for Scientific American and The New York Times, offers her insights from assessing thousands of research studies on kids on this latest episode of How to Talk to Kids about Anything.
https://drrobynsilverman.com/wp-content/uploads/2022/06/RobynSilverman-PodcastArt-Moyer-700x700-1.jpg 700 700 Jason Silverman https://drrobynsil.wpengine.com/wp-content/uploads/2018/02/Dr-Robyn-Logo-GRADIENT-300x93.png Jason Silverman2022-06-22 01:54:502022-06-22 02:02:05How to Raise Kids Who Don’t Act Like Jerks with Melinda Wenner Moyer 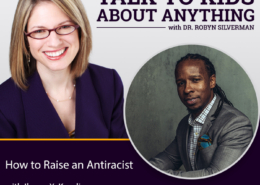 June 14, 2022
Special guest: Ibram X. Kendi Many of us, in the past, have been taught that we should not see color—not to mention color-- when looking at the people around us, in our community, in our schools or in the various towns, cities, states and countries. But is parenting in this “colorblind” way really the method of irradicating racism? There are great tragedies involving black and brown people- discrimination that they must contend with everyday—so pretending that color doesn’t matter isn’t helping—because it does matter- how people look at race and treat people across races must be discussed in order to erase racism. Through empathy, critical thinking, asking key questions and allowing for uncomfortable conversations to happen, we not only teach kids how to NOT be racist- but how to be antiracist—actively pursuing a community and a world where racist structures are challenged, mistakes are admitted and new paths are forged so that true equality can be achieved. How do we raise an antiracist? How do we engage in these critical conversations? For that, we turn to my next guest, Dr. Ibram X. Kendi.
https://drrobynsilverman.com/wp-content/uploads/2022/06/RobynSilverman-PodcastArt-Kendi-700x700-1.jpg 700 700 Jason Silverman https://drrobynsil.wpengine.com/wp-content/uploads/2018/02/Dr-Robyn-Logo-GRADIENT-300x93.png Jason Silverman2022-06-14 15:30:232022-06-14 15:57:09How to Raise and Antiracist with Ibram X. Kendi

For insightful, informative and important information on Parenting Tips, Personal Development & Body Image, Dr. Robyn’s blog is the place to be.

Dr. Robyn’s “How to Talk to Kids About Anything” is the podcast you’ve been hoping for.  Launching Soon…stay tuned!

Looking for a speaker who will Inspire, Educate and Entertain? Dr. Robyn’s keynotes, presentation, and workshops are always an audience favorite!

Dr. Robyn is often called upon by The Today Show, Good Morning America, and many other top level news shows to provide a qualified opinion.

Check Out The Latest Podcast Episodes from Dr. Robyn 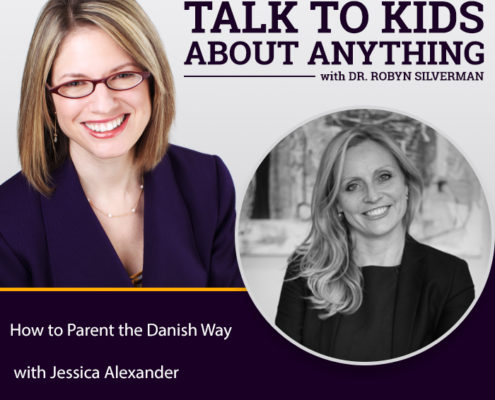 March 8, 2022
Special guest: Jessica Alexander. Denmark has been voted as having the happiest people in the world by the OECD (Organization for Economic Cooperation and Development) almost every year since 1973. That’s more than 40 years of happiness! It begs the question—is it the parenting? I mean, is there a Danish Way of parenting? It turns out, there is, and while the Danish Way of parenting is not the only reason Danes are the happiest, it does play a very important role—and the success of it all seems to be tied to the ways they educate children far beyond academics—focusing on play, empathy and social skills. It’s important to delve into it, I hope you would agree, since happy kids tend to grow up to be happy adults who raise happy kids—and the seasons go ‘round and round again. And while in the United States and in other areas of the world, we are seeing an increase of anti-depressants, suicides among young people and mental health diagnoses, as well as a great deal of competition between parents and we have a lot to learn from the Danes. Best-selling Author, Journalist, Danish Parenting Expert & Cultural Researcher, Jessica Alexander’s book "The Danish Way of Parenting: What the Happiest People in the World Know about Raising Confident Capable Kids" has been published in over 25 countries. Her work has been featured in TIME, The Wall Street Journal, Salon, Huffington Post, NPR, NY Times, and many more. She regularly does talks and workshops for parents, schools and organizations like Google, The Women's Network of the United Nations, The World Parenting Forum and many more. She has also worked as a spokesperson for LEGO on the Power of play.
END_OF_DOCUMENT_TOKEN_TO_BE_REPLACED
https://drrobynsilverman.com/wp-content/uploads/2019/06/RobynSilverman-PodcastArt-Jessica-Alexander-700x700.jpg 700 700 Jason Silverman https://drrobynsil.wpengine.com/wp-content/uploads/2018/02/Dr-Robyn-Logo-GRADIENT-300x93.png Jason Silverman2022-03-08 19:00:212022-03-08 19:00:21How to Parent the Danish Way with Jessica Alexander – ReRelease March 1, 2022
Special guest: Lisa Heffernan. This podcast will focus on raising independent teens so that they can become young adults who can take care of themselves and make good, wise choices on their own. What skills do they need? What must they learn? Dr. Robyn Silverman interviews Lisa Heffernan from Grown and Flown on the How to Talk to Kids about Anything podcast.
END_OF_DOCUMENT_TOKEN_TO_BE_REPLACED
https://drrobynsilverman.com/wp-content/uploads/2022/03/RobynSilverman-PodcastArt-Heffernan-700x700-1.jpg 700 700 Jason Silverman https://drrobynsil.wpengine.com/wp-content/uploads/2018/02/Dr-Robyn-Logo-GRADIENT-300x93.png Jason Silverman2022-03-01 03:20:552022-03-01 13:07:54How to Parent Teens to Become Young Adults Who Have Grown & Flown with Lisa Heffernan Wow! If your school district has not invited Dr. Robyn Silverman to speak with staff and parents about bullying, you and they are missing out on one of the best opportunities. Everyone was engaged and left with practical and implementable to use with children. They also learned that they and the school are a team working together to provide a safe environment for all students.

Dr. Silverman has a unique way of making this taboo subject simple and relevant to the particular audience. She is brilliant – her knowledge of the subject, her wit and her engaging style kept our attendees captivated. Robyn’s energy, conviction, and the undeniable truth of her message inspired so many to take action – to do something NOW to make a positive difference in the lives of girls. The preparation and care that Robyn takes to craft her powerful message specifically for the target audience is a mark of her professionalism and her commitment to girls

It was phenomenal!!!!  Dr. Robyn did a great job and we touched the lives (and changed the lives) for many young women! It was a very rewarding experience and we will definitely work with Robyn again for our McLean event and our Houston event.

In her energetic and engaging style, Dr. Silverman was able to touch upon vital issues that mothers and daughters are beginning to face in their child’s “tween” years. Her interactive exercises, “rewards” for audience participation, storytelling, and posed questions allowed both mothers and daughters to open up in a non threatening environment using effective communication tools in a fun and exciting way.

As the applause, laughter, participation, and evaluations reflected, the audience found this to be an excellent presentation, appreciating Dr. Silverman’s enthusiasm and easy going, accessible style. We had many people make a point to come over and tell us how much they loved the event and to thank us for a wonderful evening.

We were so glad to work with Dr. Silverman on this amazing night and look forward to working with her again in the future. We highly recommend her as a speaker for your next event.

Dr. Silverman has a unique way of making this subject simple and relevant to the particular audience. She is brilliant – her knowledge of the subject, her wit and her engaging style kept our attendees captivated. Robyn’s energy, conviction, and the undeniable truth of her message inspired so many to take action – to do something NOW to make a positive difference in the lives girls. The preparation and care that Robyn takes to craft her powerful message specifically for the target audience is a mark of her professionalism and her commitment to girls.

On behalf of our students, staff, and parents, I would like to say “Thank You” for a wonderful presentation! Several kids expressed their thankfulness to me for having you come and speak to them, and the response from the parents was awesome. We will continue to educate, expect great things from our kids, and build a school of character! Thank you again.

Working with Dr. Robyn Silverman was an absolute joy. Not only did she ensure that her keynote speech suited the needs of our event, but her energy and excitement delivering it were unparalleled. She brought not only expertise and practical skills to our girls but also warmth and genuine care for her audience. Dr. Robyn’s presentation set the tone for the rest of the day, enabling girls to open up, learn, and have fun. It was clear that they had connected to her message and walked away inspired.

Dr. Silverman is awesome! She is an incredible speaker, and the sincerity and truth in her words are evident. After the presentation to the students, they expressed their appreciation with a standing ovation–which doesn’t happen often in junior high!

Dr. Robyn was amazing! Before the workshop officially started, she walked around and warmly welcomed each woman by shaking her hand and saying hello. I loved this…Dr. Robyn’s mix of personal anecdotes, eye-opening statistics, and disturbing images make the seminar funny, warm, emotional, and touching… Attending Dr. Robyn’s seminar empowered me to want to do even more. She empowered us to be the change we want for our girls, and instead of just leaving it at that, she gave us realistic steps we can take to counteract the negative and confusing messages presented to our girls on a daily basis. And I wasn’t the only one who was impressed. Our participants LOVED Dr. Robyn! They lined up in droves to buy her book, Good Girls Don’t Get Fat, have her sign it, and speak with her about their thoughts, opinions, and gratitude…I am working to collaborate with Dr. Robyn in the future!