How to Talk to White Kids about Race & Racism with Dr. Margaret Hagerman - drrobynsilverman.com

How to Talk to White Kids about Race & Racism with Dr. Margaret Hagerman

How to Talk to White Kids about Race & Racism 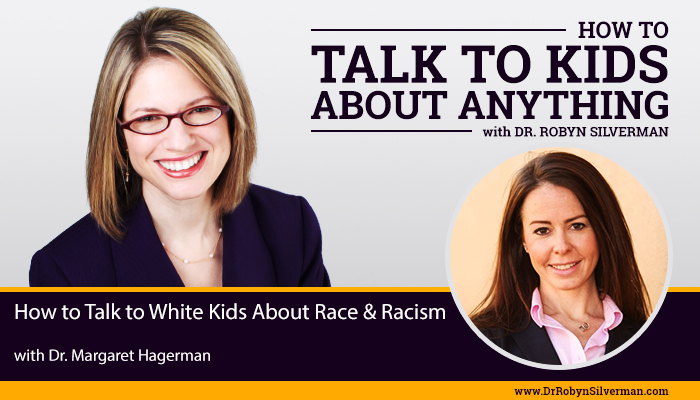 This podcast will focus on how white kids are being educated about race and racism in America. While we know from research that black families teach their children about social inequalities, race and racism from an early age, what are white families doing? Are families and communities a place where white kids learn to become racist or a space where they learn to be antiracist or race-conscious? Do white kids learn, within the family paradigm, to challenge racial inequalities? Dr. Margaret Hagerman talks about her research and her new book: White kids: Growing Up With Privilege in a Racially Divided America. It’s an important topic that many people avoid out of discomfort or confusion with regard to how to discuss it. We get right into it on How to Talk to Kids about Anything.

Many people, when asked about racism, talk about the days of slavery, segregated busses, white and colored water fountains and segregated schools. But what about today’s racism? American kids, as well as others throughout the world, are living in at a time of ongoing public debates about race, daily displays of racial injustice, and for some, an increased awareness surrounding diversity and inclusion. And while everyone should learn about racism, past and present, how are white, affluent children being educated about white privilege, unequal educational opportunities, and police violence.

This was the overarching question, Margaret Hagerman aimed to answer in her new book, White Kids: Growing Up With Privilege in a Racially Divided America—a book that summarizes two years of research that focused on her observations of upper-middle-class white families in an unidentified midwestern city and its suburbs. In particular, she followed 36 kids between the ages of 10 and 13, interviewed them, watched them interact with others and listened in on their conversations. What she found out about modern-day racism and what is means to grow up with privilege in a racially-divided America was eye-opening.

Dr. Margaret A. Hagerman is an Assistant Professor of Sociology at Mississippi State University. Her research focuses on how children learn about race and racism in the context of their families and communities. Her new book, as I mentioned before, is called White Kids: Growing Up With Privilege in a Racially Divided America (NYU Press) and is already being celebrated for it’s honest portrayal and revealing message since it’s release last month. I’m really looking forward to digging into this tough topic so please join me in welcoming Dr. Hagerman to the show today- welcome, Maggie, to how to talk to kids about anything.

Kids are asking- if we have sex education, why don't we have race education? Good question. We are getting comfortable with being uncomfortable and discussing how to #talktokids about race and racism this week with @maggiehagerman Click To Tweet

How to Prepare Kids to Lead & Succeed in a Changing World with Dr. Tim...

How to Talk to Kids about Sexual Harassment with Lara Kaufmann & Dr. Christia...
Scroll to top