How to Talk to Kids about Sexual Harassment with Lara Kaufmann & Dr. Christia Spears Brown - drrobynsilverman.com

How to Talk to Kids about Sexual Harassment with Lara Kaufmann & Dr. Christia Spears Brown

You are here: Home1 / Blog2 / Podcast3 / How to Talk to Kids about Sexual Harassment with Lara Kaufmann & Dr....

How to Talk to Kids about Sexual Harassment 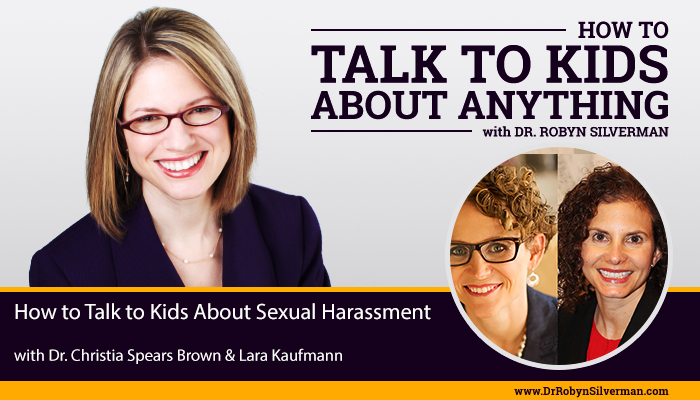 This podcast will focus on how parents, teachers and coaches of children K-12 can start talking more openly about sexual harassment and sexual violence. In order for this kind of behavior to stop, everyone much address the norms and stereotypes that fuel it, so all young people can grow up safe, respected and valued. In 2006, Tarana Burke coined the phrase “Me Too” as a way to help women who had survived sexual violence feel like they were not alone. A year ago this week, actress Alyssa Milano reignited “me too” with a tweet that stated “If you’ve been sexually harassed or assaulted write ‘me too’ as a reply to this tweet.” This was in the wake of accusations against movie mogul Harvey Weinstein and other powerful men in Hollywood. Since then, “me too” has become a movement among women who have been sexually harassed. Since then, a great deal of reports have come out and “metoo” has gained great traction among adults. But what about our teens? How are they experiencing sexual harassment and violence? Believe or not, 7 out of 10 girls experience sexual harassment and alarmingly, 1 in 4 girls will experience sexual assault or abuse before she turns 18. A recently released survey of young girls reveals that 3 out of 4 girls between the ages of 14 and 19 feel unsafe at least once in a while. At the root of this problem are limiting and harmful messages about how girls and boys should behave and be treated—messages that shape these impressionable minds and stick with them as they enter adulthood. As a response, and in honor of the 1 year anniversary of the week, Girls Inc, a nonprofit organization that inspires all girls to be strong, smart and bold through direct service and advocacy, along with its amazing network of girls and partners, are launching the #girlstoo campaign. This campaign will focus on sexual harassment and assault in the lives of youth, particularly girls, with actions aimed at addressing the norms and stereotypes that fuel these behaviors. To discuss how we talk about sexual harassment, assault and violence—and what we can all do ensure that our young people are educated, safe, respected and valued, we have Lara Kaufmann and Dr. Christia Spears Brown on the show today.

where she leads the organization’s work to advance girls’ rights and opportunities and empower girls to advocate for social change.  Prior to joining Girls Inc., Ms. Kaufmann was Senior Counsel and Director for Education Policy for At-Risk Students at the National Women’s Law Center, where she engaged in litigation, advocacy, and outreach to improve educational outcomes for at-risk girls and young women. She is a graduate of the University of Michigan and Northwestern University School of Law.

Dr. Christia Spears Brown is a Professor of Developmental and Social Psychology at The University of Kentucky and the Director of the Center for Equality and Social Justice. Her research focuses on children’s experiences with discrimination and the development of gender and ethnic stereotypes. As part of her research, she examines the perpetration and acceptance of sexual harassment among adolescents and the consequences of sexual objectification of girls and toxic masculinity among boys. She also works to translate her work for both public policy and parents. Her book titled, Parenting Beyond Pink and Blue:  How to Raise Your Kids Free of Gender Stereotypes, describes research on gender development and offers guidance for parents for reducing the impact of gender stereotypes on their children

Sadly, girls learn early on to keep quiet about sexual harassment, says @LaraSKauf of @girls_inc. Want to change the conversation? We talk all about the new #girlstoo movement on the latest #talktokids podcast! Click To Tweet

Parenting Beyond Pink and Blue:  How to Raise Your Kids Free of Gender Stereotypes (Book by Dr. Christia Brown)

How to Talk to White Kids about Race & Racism with Dr. Margaret Hagerm...

How to Organize your Life so You Can Bring Out the Best in Your Child and You...
Scroll to top