How to Talk to Kids about Bullying with Carrie Goldman - ReRelease - drrobynsilverman.com

How to Talk to Kids about Bullying with Carrie Goldman – ReRelease

You are here: Home1 / Blog2 / Podcast3 / How to Talk to Kids about Bullying with Carrie Goldman – ReRelea...

How to Talk to Kids about Bullying 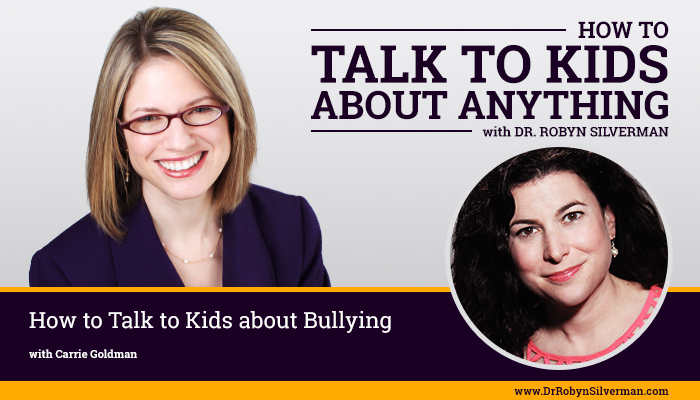 This podcast will focus on what bullying is vs normal social conflict as well as what to do and say when your child tells you that s/he is being bullied. What is a true friend? How can we help? What message can we send to bystanders and how can the consequence to bullying be restorative rather than just punitive? We also go over what to when a child feels scared to ask for help for fear of retaliation. And what do we say to the child who is socially different and is getting the message that they deserve to be mistreated due to their undesirable traits or behaviors? This podcast provides the answers. It’s Antibullying month so it’s a great time to talk to kids about bullying. Bullying is a hot topic these days- of course it is.  As our kids are more and more disconnected personally- due to Covid- they are online more than ever. Disconnection breeds a lack of empathy and cyberbullying and in-person bullying becomes more common.

Studies tell us that, more and more, bullying can have a lasting effect on a person’s mental health. Not to mention, we hear tragic stories about children feeling hopeless and helpless when they are being bullied- even some who have turned to hurting themselves or suicide because they don’t see anyway out. As a person who was bullied during my 5th grade year—I can relate to feeling so frustrated and upset and misunderstood and stuck, overwhelmed and targeted while I was being bullied- and I vowed that I would do whatever it took to help young people feel confident in their own skin, speak up when they see something is not right, and help the adults who love kids to know some tips and scripts to be helpful when a child is being bullied. You have heard the podcast with Rosalind Wiseman when we spoke abut creating a culture of dignity among young people- now we have one of my friends and colleagues, Carrie Goldman, on the show, to talk more about bullying, in particular. Carrie Goldman is the award-winning author of Bullied: What Every Parent, Teacher, and Kid Needs to Know About Ending the Cycle of Fear (Harper Collins). Bullied has received a National Parenting Publication Award and a Mom’s Choice Award, both at the gold medal level, for excellence in educational skills and tools. Carrie has also written for The New York Times, CNN, Psychology Today, Huffington Post, Brain Child Magazine, Adoption.net, Babble, Alternet, and more. She has made appearances on NPR, BBC, MSNBC, CNN Headline News, Fox, HLN, HuffPost Live and Mondays with Marlo, along with countless other media outlets. In addition to her expertise in bullying dynamics, Carrie writes one of the nation’s premier adoption blogs, Portrait of an Adoption, which has followers in more than 45 countries. Her acclaimed children’s chapter book, Jazzy’s Quest: Adopted and Amazing, came out in June of 2015, and the sequel, Jazzy’s Quest: What Matters Most, came out in November of 2016. You can find more out about our fabulous guest, Carrie Goldman, at CarrieGoldmanAuthor.com

How to Talk to Kids about Media & Technology with Caroline Knorr of Common...

How to Talk to Kids about Fears & Phobias with Dr. Andrea Umbach Re-Re...
Scroll to top