How to Talk to Kids about Adoption with Carrie Goldman - drrobynsilverman.com

How to Talk to Kids about Adoption with Carrie Goldman

You are here: Home1 / Blog2 / Podcast3 / How to Talk to Kids about Adoption with Carrie Goldman

How to Talk to Kids about Adoption 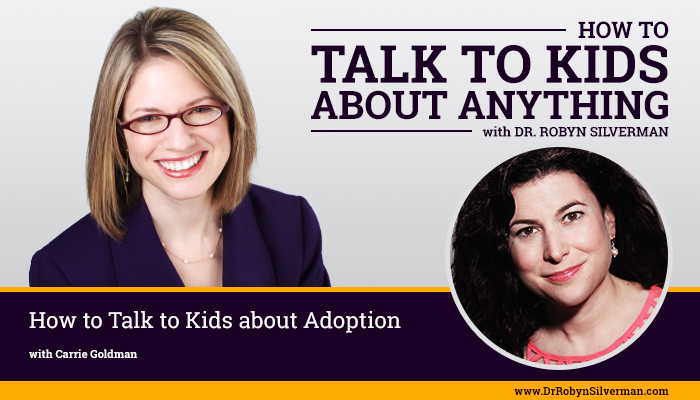 This podcast will focus on adoption—what it is, what it isn’t and how to talk to kids about it when emotions and fear and love and hope are all wrapped up in it. There is some confusion about adoption and as an adoptive mother of my two kids, I’m excited to bring Carrie Goldman, adoptive mom and writer/founder of the adoption blog, Portrait of Adoption, on How to Talk to Kids about Anything today.

Every year, there are many thousands of adoptions. In fact, there have been estimates of up to 135,000 adoptions per year in the United States alone. Still, there are many misunderstandings about adoption- fueled by hyped up stories in the media and inaccurate assumptions made about the people who place their children for adoption and those who adopt. All of this creates fears and questions for parents who have adopted- how do I talk to my kids about adoption? What if they tell me, while in a fight about brushing teeth or cleaning their room, that they’d prefer to live with their birth parents? What if they want to have more contact with their birth family—is that ok? And really, ultimately, what is healthiest for my child? Kids who were adopted as well as kids who know children who were adopted, may have questions along the way. Why does adoption happen? And what is it all about? Of course the answers are all about good honest communication, solid emotional intelligence, listening and love. Full disclosure? We adopted both of our children and I think adoption rocks.

Who else thinks adoption rocks? Hopefully you do—but I can tell you that my next guest also thinks it’s pretty awesome as she is an adoptive mom as well.

Carrie Goldman has written for everything from The New York Times, CNN, Psychology Today, Huffington Post, and more. She has made appearances on NPR, BBC, MSNBC, CNN, along with countless other media outlets. Carrie writes one of the nation’s premier adoption blogs, Portrait of an Adoption, which has followers in more than 45 countries. Her acclaimed children’s chapter book, Jazzy’s Quest: Adopted and Amazing, came out in June of 2015, and the sequel, Jazzy’s Quest: What Matters Most, came out in November of 2016. In addition to her adoption expertise, she is also the award-winning author of Bullied: What Every Parent, Teacher, and Kid Needs to Know About Ending the Cycle of Fear (Harper Collins) which we discussed in a previous podcast episode. Bullied has received a National Parenting Publication Award and a Mom’s Choice Award, both at the gold medal level, for excellence in educational skills and tools. You can find more out about our fabulous guest, Carrie Goldman at CarrieGoldmanAuthor.com

How do you #talktokids about #adoption? @DrRobyn & #podcast guest, @CarrieMGoldman, both adoptive moms, discuss how to answer questions with honesty, love and emotional intelligence. Click To Tweet
Parenting is not just about biology, says @CarrieMGoldman on my #talktokids #podcast this week! So how do you talk to kids about adoption? We discuss the answer right here-> Click To Tweet

Book: Bullied: What Every Parent, Teacher, and Kid Needs to Know About Ending the Cycle of Fear

Jazzy’s Quest: What Matters Most

How to Talk to Kids about Tech Milestones & Digital Readiness with Devorah...

How to Talk to Kids about ‘Mean Girl’ Social Aggression with Katie...
Scroll to top