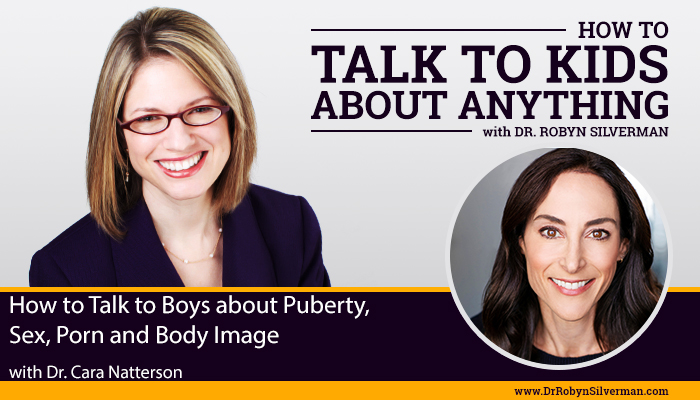 This podcast will focus on how to decode boys and talk to boys about puberty, sex, porn, nudes and body image. It’s vital that we talk to boys about these tough topics as it’s part of keeping them healthy and safe—and that’s a big part of our job as parents. Dr. Robyn Silverman interviews Dr. Cara Natterson about how to talk to boys about this sensitive subject matter. Boys deserve to have the right information that helps them learn about positive relationships and sex and, at the same time, helps to protect them from becoming vulnerable to societal messages about body image, pornography and violence. With so much research done on girls in the area of puberty, sex, owning their bodies and understanding their moods, there has been a refreshing move to including boys in the conversation after many years of assuming that they just quietly and easily flowed from child to adult (unlike their female counterparts). Of course, just because boys often got quieter during puberty, doesn’t mean that they don’t have a lot going on—a lot that we really do need to discuss. In fact, leaving our sons to manage the ups-and-downs of puberty on their own denies them accurate information and leaves them vulnerable to societal messages about body image, pornography, and violence.

Now you’ve heard the interview I did with the fabulous Peggy Orenstein on Boys and Sex as well as well as the fascinating interview I did with Micheal Richert on How to Raise a Boy. Now we are going to leap headfirst into some of the pressing questions we want answered about what’s really going on with boys as they are going through puberty. “What is my son doing behind his constantly closed door? What’s with his curt responses, impulsiveness, newfound obsession with gaming, and…that funky smell? And of course, for our purposes, how do we talk to him about all these things he’s going through so he doesn’t feel alone and confused about what he’s feeling and what’s happening to him? Time to get comfortable with feeling a little uncomfortable again—as we delve into decoding boys with best-selling author, Dr. Cara Natterson.

Cara Natterson, M.D., is a pediatrician, popular speaker, consultant, and New York Times bestselling author of multiple parenting and health books, including the Care and Keeping of You book series, which has more than six million copies in print, and Guy Stuff, the corollary for boys. She has now written a book called Decoding Boys: New Science Behind the Subtle Art of Raising Boys—and provides information that is write up my alley—in fact, she writes on the very first page; “we can’t decode our boys if we don’t talk to them.” Yes! Dr. Natterson is a graduate of Harvard College and Johns Hopkins Medical School, and she trained in pediatrics at the University of California at San Francisco. After working as a general pediatrician for many years, she founded Worry Proof Consulting, a first-of-its-kind practice offering parents open-ended appointments. She also provides medical expertise for numerous parenting websites and serves on several boards including Starlight Children’s Foundation, Mattel’s Barbie Council, The Honest Company’s medical advisory, and Zemcar, a safe rides service for children. She lives in Los Angeles with her husband and their two teenagers.

How to Talk to Kids About Anger & Big Feelings with Wendy Young –...

How to Raise Joyful Kids In a Stressful World with Katie Hurley – ReR...
Scroll to top