How to Raise Kids Who Don’t Act Like Jerks with Melinda Wenner Moyer - drrobynsilverman.com

You are here: Home1 / Blog2 / Podcast3 / How to Raise Kids Who Don’t Act Like Jerks with Melinda Wenner Moyer

How to Raise Kids Who Don’t Act Like Jerks 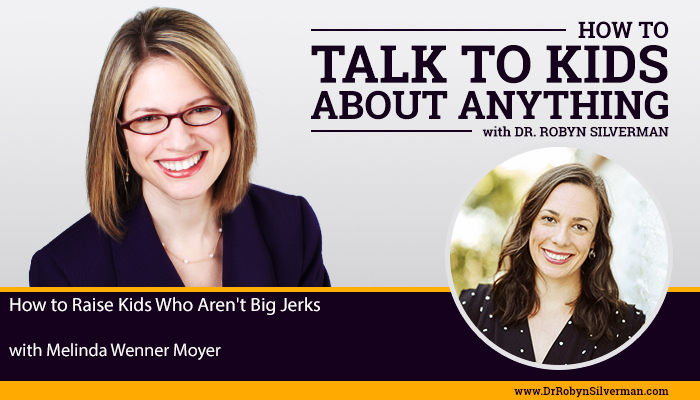 This podcast will focus on how to raise kids who don’t act like jerks—who aren’t racist, sexist, rude bullies and instead show up in this world as empathetic, kind good people. Melinda Wenner Moyer, who writes for Scientific American and The New York Times, offers her insights from assessing thousands of research studies on kids on this latest episode of How to Talk to Kids about Anything.

We are going to talk about how to raise kids who don’t act like big jerks today—who aren’t racist, sexist, rude, stingy bullies but rather those who think of others, finish what they’ve started, tell the truth and show empathy. Tall order. Why? Because from social media to TV programs, movies and even in the adults they see in leadership positions, kids are being exposed to messages that being selfish, obnoxious and cruel is okay and gets things done. Hate crimes among children and teens are rising, while compassion among teens has been dropping—this has been referred to as a “crisis of kindness” by our next guest. We want our kids to show empathy, resilience, and positive action but many of us struggle with how to make this happen. The good news is that science—the hundreds and thousands of studies done by reputable scientists and researchers over the years paints a picture that gives us a “connect the dots” to help our children thrive while also raising them to be kind, antiracist, empathetic, good people. So, what can we learn from the science? For that, we have my next guest to thank who has written a book to help us understand the science and use it in our own homes.

Melinda Wenner Moyer is a contributing editor at Scientific American magazine and a regular contributor to The New York Times, Washington Post, and other national magazines and newspapers. She is a faculty member in the Science, Health & Environmental Reporting program at NYU’s Arthur L. Carter Journalism Institute. Her first book, How To Raise Kids Who Aren’t Assholes, was published in July 2021 and the paperback is out this week! I’ve had the pleasure of being interviewed by Melinda for the New York Times a few times as well as for Undark and her newsletter and she always does thorough research.

How to Raise and Antiracist with Ibram X. Kendi

How to Forego Impossible Parenting Standards & Tap into Our Own Wisdom...
Scroll to top