How to Raise and Antiracist with Ibram X. Kendi - drrobynsilverman.com

How to Raise and Antiracist with Ibram X. Kendi

You are here: Home1 / Blog2 / Podcast3 / How to Raise and Antiracist with Ibram X. Kendi

How to Raise an Antiracist 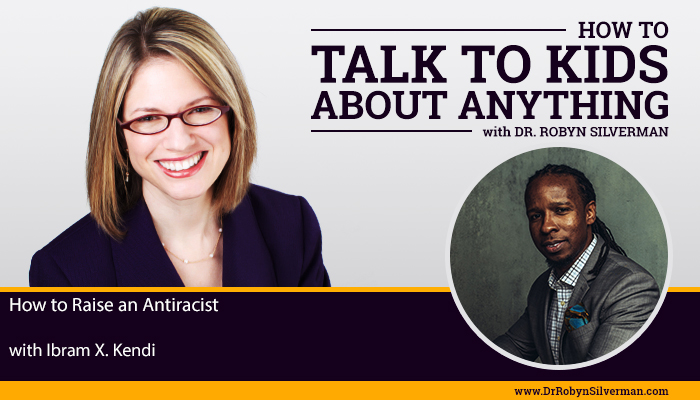 This podcast will focus on how to raise and antiracist—actively pursuing ways to challenge stereotypes, discriminatory norms and racist structures while teaching kids to use empathy and ask critical questions about what they see, hear and feel regarding race. We will learn how to raise an antiracist from this week’s guest, Dr. Ibram X. Kendi.

Many of us, in the past, have been taught that we should not see color—not to mention color– when looking at the people around us, in our community, in our schools or in the various towns, cities, states and countries. But is parenting in this “colorblind” way really the method of irradicating racism? There are great tragedies involving black and brown people- discrimination that they must contend with everyday—so pretending that color doesn’t matter isn’t helping—because it does matter- how people look at race and treat people across races must be discussed in order to erase racism. Through empathy, critical thinking, asking key questions and allowing for uncomfortable conversations to happen, we not only teach kids how to NOT be racist- but how to be antiracist—actively pursuing a community and a world where racist structures are challenged, mistakes are admitted and new paths are forged so that true equality can be achieved. How do we raise an antiracist? How do we engage in these critical conversations? For that, we turn to my next guest, Dr. Ibram X. Kendi.

Dr. Ibram X. Kendi is the Andrew W. Mellon Professor in the Humanities at Boston University and the founding director of the BU Center for Antiracist Research. He is a contributing writer at The Atlantic and a CBS News racial justice contributor. He is the host of the new action podcast Be Antiracist. Dr. Kendi is the author of many highly acclaimed books including Stamped from the Beginning: The Definitive History of Racist Ideas in America, which won the National Book Award for Nonfiction, making him the youngest-ever winner of that award. He has also produced five straight #1 New York Times bestsellers, including How to Be an Antiracist, Antiracist Baby, and Stamped: Racism, Antiracism, and You, co-authored by Jason Reynolds. In 2020, Time magazine named Dr. Kendi one of the 100 most influential people in the world. He was awarded a 2021 MacArthur Fellowship, popularly known as the Genius Grant. He also is the author of a new book, How to Raise an Antiracist- the topic of today’s podcast.

As a parent, it's okay for your to experience constructive discomfort, says @DrIbram, on #talktokids podcast. In fact, he says, it is protective for our children to engage with them about race and racism. Listen in here! Click To Tweet

How to Help Parents Understand & Support their LGBTQ Kids with Kristin...