How to Raise a Confident, Capable, Resilient Adult with Julie Lythcott-Haims - drrobynsilverman.com

How to Raise a Confident, Capable, Resilient Adult with Julie Lythcott-Haims

You are here: Home / Blog / Podcast / How to Raise a Confident, Capable, Resilient Adult with Julie Lythcott...

How to Raise a Confident, Capable, Resilient Adult 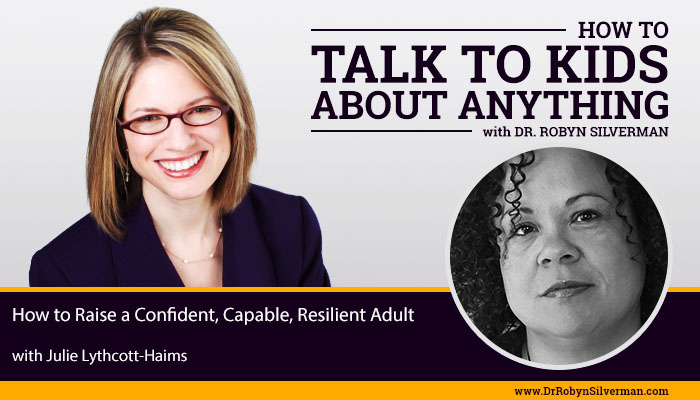 This podcast will focus on the downfalls of overparenting and how to step back to allow children the room to step up and become confident, capable, resilient adults. A troubling trend has taken over which has created parents who micromanage, overprotect and over-direct children’s childhoods. Children are floundering from the messages that they need mom or dad’s help or input every step of the way and grow up to expect rescuing rather than relying on their own abilities to get through tough situations. This podcast sets us all straight so that we raise our kids to believe in themselves and become truly competent so that they can stand on their own two feet as they progress from childhood into young adulthood. 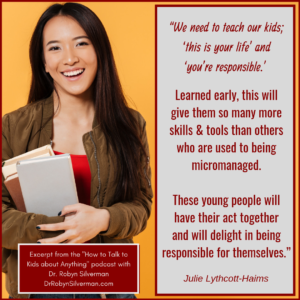 In her 2016 Ted Talk, Julie Lythcott-Haims started off by saying, “there’s a certain style of parenting these days that is kind of messing up kids, impeding their chances to develop into themselves. There’s a certain style of parenting these days that’s getting in the way. I guess what I’m saying is, we spend a lot of time being very concerned about parents who aren’t involved enough in the lives of their kids and their education or their upbringing, and rightly so. But at the other end of the spectrum, there’s a lot of harm going on there as well, where parenting feel a kid can’t be successful unless the parent is protecting and preventing at every turn and hovering over every happening and micromanaging every moment, and steering their kid towards some small subset of colleges and careers….our kids end up leading a kind of check-listed childhood, she goes on to say, such that, she warns that once they end up at the end of high school they are breathless—of course—they have spent so much time having been obsessed with grades and activities—becoming what they are supposed to be rather than exploring who they may want to become. What interests them. And knowing, with their own brains and experimenting with their own grit and their own skills—to develop into a self-sufficient, resilient adult. So it begs the question—what can we do to break free from the overparenting trap that says we must be on our children every minute prodding and directing, being our child’s concierge, as Julie Lythcott-Haims labels, and instead, preparing our children to become successful adults who can stand on their own two feet.

Julie Lythcott-Haims roots for humans. Humans need agency in order to make their way forward; Julie is deeply interested in what impedes us. She is the New York Times bestselling author of How to Raise an Adult, an anti-helicopter parenting manifesto which gave rise to one of the top TED Talks of 2016, and now has over 3 million views. Her second book is the critically-acclaimed prose poetry memoir Real American, which illustrates her experience with racism and her journey toward self-acceptance. A third book on how to be an adult, for young adults, is forthcoming. She is a former corporate lawyer and Stanford dean, and she holds a BA from Stanford, a JD from Harvard, and an MFA in Writing from California College of the Arts. She lives in the San Francisco Bay Area with her partner of thirty years, their teenagers, and her mother.

Let’s step back so our kids can step up, says @DeanJulie on #talktokids podcast. Want to know how we can raise our children to become successful, thriving adults? Wise words from this best-selling author here. Click To Tweet

How to Talk to Kids about Dignity with Dr. Donna Hicks

How to Talk to Kids about the Gifts, Tools and Rituals of the ADHD Brain with...