How to Parent the Danish Way with Jessica Alexander - ReRelease - drrobynsilverman.com

How to Parent the Danish Way with Jessica Alexander – ReRelease

You are here: Home1 / Blog2 / Podcast3 / How to Parent the Danish Way with Jessica Alexander – ReRelease

How to Parent the Danish Way: Learning from the Happiest People in the World 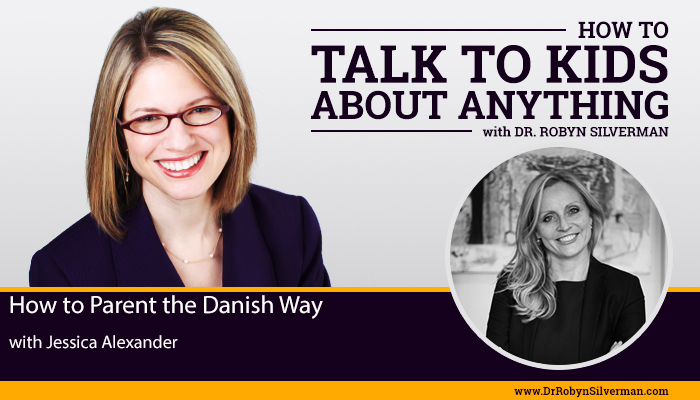 This podcast focuses on how to parent the Danish way—lessons from the happiest people in the world! Happy, peaceful children grow into happy, peaceful adults who raise happy, peaceful children—and the Danish way of parenting seems to breed happy people! Jessica Alexander and Dr. Robyn Silverman talk about some of the unique methods of Danish parents that help to develop empathy, encourage play and incite togetherness that are foundational to the Danish culture. Walk away with some easy-to-follow tips that can bring peace and wellness to your family during chaotic times. Development) almost every year since 1973. That’s more than 40 years of happiness! It begs the question—is it the parenting? I mean, is there a Danish Way of parenting? It turns out, there is, and while the Danish Way of parenting is not the only reason Danes are the happiest, it does play a very important role—and the success of it all seems to be tied to the ways they educate children far beyond academics—focusing on play, empathy and social skills. It’s important to delve into it, I hope you would agree, since happy kids tend to grow up to be happy adults who raise happy kids—and the seasons go ‘round and round again. And while in the United States and in other areas of the world, we are seeing an increase of anti-depressants, suicides among young people and mental health diagnoses, as well as a great deal of competition between parents and we have a lot to learn from the Danes.

Best-selling Author, Journalist, Danish Parenting Expert & Cultural Researcher, Jessica Alexander’s book “The Danish Way of Parenting: What the Happiest People in the World Know about Raising Confident Capable Kids” has been published in over 25 countries. Her work has been featured in TIME, The Wall Street Journal, Salon, Huffington Post, NPR, NY Times, and many more. She regularly does talks and workshops for parents, schools and organizations like Google, The Women’s Network of the United Nations, The World Parenting Forum and many more. She has also worked as a spokesperson for LEGO on the Power of play.

• How the Danish way of parenting can bring calm, peace and happiness into the family.

• How the Danish rear happy children.

• How parenting the Danish way can help your children to be more empathic and open-minded as well as positive in how they see others.

• How play impacts the child and family

• How the “openness” of the Danish helps to facilitate lifelong conversations.

• Why it’s so important to be reflective of your “default settings.”

The more vulnerable and emotionally honest we are with our children, the more they know that they can be too, and other smart things @JessicaJoelle of @theDanishWay says on #talktokids podcast are right here Click To Tweet

How to Parent Teens to Become Young Adults Who Have Grown & Flown with...