Boy Toys, Girl Toys and What Kids Learn When We Allow Them To Choose - drrobynsilverman.com

Blog
You are here: Home1 / Blog2 / Dr. Robyn Silverman3 / Boy Toys, Girl Toys and What Kids Learn When We Allow Them To Choose 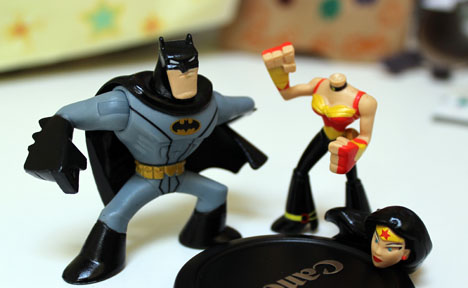 As a parent, I often wonder about how the toys and role models in my children’s lives translate to behavior.  I tend to be the kind of mother who encourages a wide range of toys, games and books.  I am less about banning (unless it is truly counter to our family’s core character-based values) and more about providing a continuum of options so that my children gain experience, choice and understanding.

That means that we have everything from princess dress up and dolls to blocks, science kits, dump trucks and dinosaurs.  And both of my children play with whatever they choose to that day.  Yes, my son has put on a tutu while bouncing and laughing in our basement bounce house and my daughter has crashed Batman and Wonder Woman action figures into a tower of blocks, saving the “little people” trapped inside from disaster.  I’ve played race cars with my son while crawling around on the kitchen floor and my husband has played dolls with my daughter while cuddling in the den. To me, it’s all good.

But I sometimes see that a range is not provided or accepted in households around America and elsewhere.  Boys play with “boy things” and girls play with “girl things” exclusively.  What do our children miss out on when toys, books and games are selected for them rather than allowing them to gravitate naturally to what interests and intrigues them?  What do they gain when they are the masters of the toys, games and books they see?

While it may not be obvious, my feeling is, quite a bit.  When our children are masters of their own toy rooms, they learn what they love.  They gain a more complex understanding about history, empathy, technology, language, engineering, art and science.  They learn that their personal passions are valid and imagination or play of many kinds are fun.

I asked my 2 ½ year old son what he liked about wearing a tutu in the bounce house a few weeks back and he told me; “It’s funnyyyy! And I yike how it goes up and down when I jump!” Yes, yes, that makes sense.  He likes the science of it—a piece of clothing that catches air when you jump is cool! Isn’t that…awesome?!  And here some might be stressing out about what wearing a tutu in a bounce house can do to a boy’s “future masculinity” but truthfully, he couldn’t care less.  He’s having a blast! Can’t we just let children play?

Skip to the cars as I asked the same question; “What do you like about racing cars in the kitchen?” My son answered; “they go weally, weally fast and woooooh they cwash!” Yup. Physics. Mechanics. Cause and effect.  Good for every gender! My daughter has been known to “acquire” my son’s Batman figure as well as his Spiderman book.  She asked for a Superhero book of her own for her most recent birthday that features Superman, Batman and Wonder Woman all together.  She’s even going as Wonder Woman to a Superhero/Princess birthday party this weekend.  When I asked Tallie what she likes about Wonder Woman, she told me; “She’s cool! She fights cwime!” Justice. Power. Self reliance.  Good for every gender!

And the lessons generalize to other areas of life. I saw something pretty remarkable the other day at the playground.  As Tallie was climbing up a steep slide, she struggled to reach the top.  Her brother, already at the top put out his hand and exclaimed; “Tawwie! I’wl save you!”  I saw her stop for a moment and look at her brother. Then she just kept climbing as she called back; “I don’t need saving! I can do it myself!”  These words are rooted in countless conversations we’ve had while playing both princesses and Superheroes.  Don’t wait to be saved; save yourself. This morning, Wonder Woman single-handedly stopped an oncoming train from crashing into the building of blocks that we all built together– and Batman rescued the people off the train. Unfortunately, there was a casualty.  The Wonder Woman action figure was decapitated.  Who makes a Superhero with such a flimsy neck? She’s an Amazon Princess Warrior for cripes sake– not a runway model! Ah, well, off to the store to invest in a Wonder Woman toy that can hold her ground…and keep up with my kids!